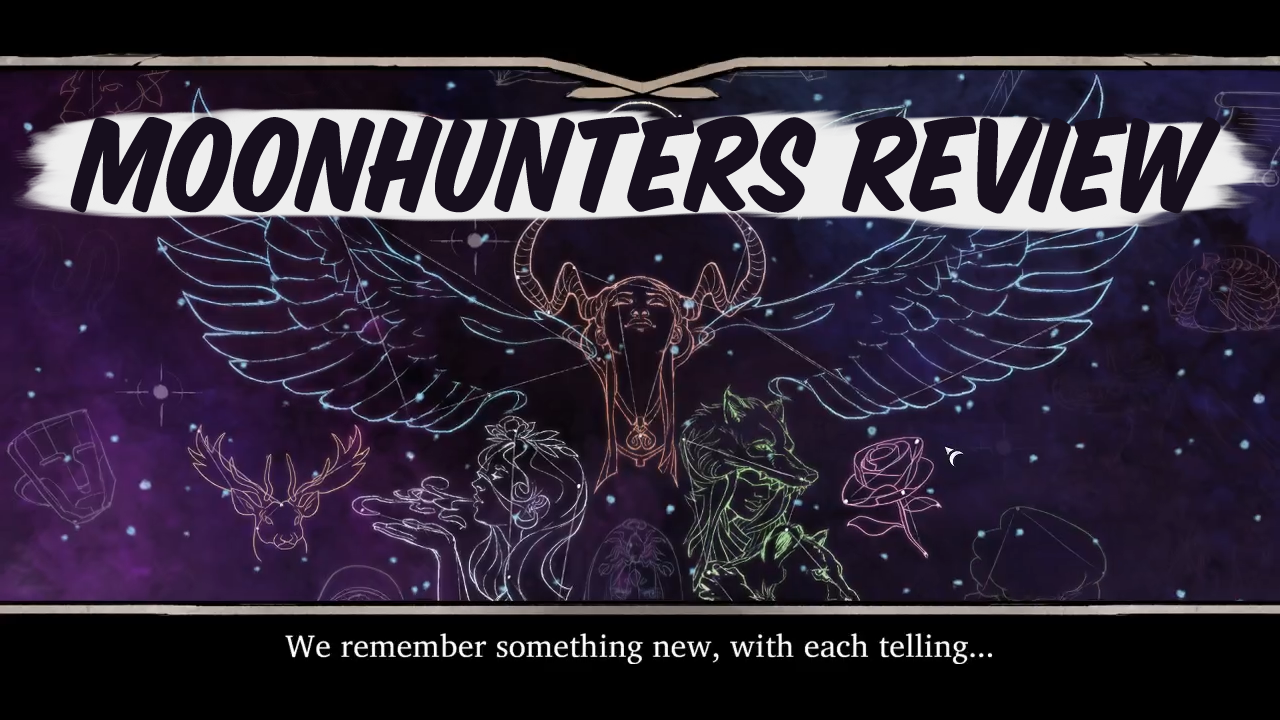 In this Moon Hunters review I’ll be going over the good, the bad, and my verdict. The game takes place in a world where people are reverent to the moon, but when she doesn’t rise they send brave(or foolish) heroes on a quest to find her. The game has multiple characters to select from, including some you unlock after playing a few times, multiple starting cities to begin in, and multiple endings as well. The length of each game can be anywhere from 20 minutes to three hours, and each play through has a randomized map with new events to interact with. As you make choices in the game, you gain stats and “traits” that allow you to interact with even more objects.

This game is full of choices, and the answers you pick affect not just your characters stats and how they are remembered, but also the environment. If you choose to break a statue in Moon Hunters, it is gone from that playthrough forever. If you team up with an evil Demon Bird, you may find him waiting for you at the end of the game. Interact with an NPC before you obtain a certain trait, and they may turn you away for good.

Even if you get the same events in two different playthroughs, you can pick different options and see how they play out. One playthrough your hero may be remembered as a cunning and deceitful snake, another playthrough you may be remembered as the patient and compassionate savior. When you camp each night you have the choice between various stat-building options, but cooking allows you to combine ingredients to increase whatever stats you like, so long as you know the recipe. Continuing through each playthrough, you collect ingredients that will stay with you on later adventures, and remember recipes from the past.

While attempting to earn every ending is an honorable goal, there are also other elements to the game that one may wish to pursue instead of getting the “happy” ending every time. Finding out how to speak with animals or spirits, befriending different NPCs, and defeating rare monsters are all objectives that can be sought after as well.

All of the classes were fun to play, and while they made keybindings intuitive inbetween each class(Space was usually a mobility move, Right Click was a Special, and Left Click was a Primary Attack) they all felt unique. In particular, the Songweaver was innovative, with different attacks and buffs coming from different combinations of notes.

I am a huge sucker for pixel art. I was mashing together Pokemon sprites when I was 10, and now any sort of quality pixel art strikes right to my heart. This game is beautiful. Zones you would normally thing would be ugly(Swamp) end up being idyllic.

Plug in your headphones and turn the volume up. This game has voice acting, sound effects, and a great soundtrack.

The game supports the use of controllers, and the game plays as intuitively with them as it does on the keyboard. On top of this- you can co-op locally, not only via online play, meaning only ONE person technically has to buy the game in order for four friends to team up and kick some Sun Cult butt.

There are so many bugs in multiplayer. None of them were so game breaking that an ALT+F4 and restart wouldn’t fix it, but wow. Sometimes each player would get de-synced from one another. You’d be off running around making choices and fighting monsters, only to realize that the other player was doing something completely different.

There are some bushes you can walk through, and some you can’t. Some tufts of snow are fun textures to walk across, while others are impassible potholes. All this doesn’t seem to correlate to a certain graphic either. Perhaps it is a clipping bug, but there are rocks you can walk over and rocks you can’t, and they look exactly the same.

The Leadership mechanic was confusing and non-intuitive. Essentially, the person with the most charm seems to get to have “their way” with the choices in terms of the way NPCs respond, but both players still get to choose and gain different benefits based on what they picked. I’m still not exactly sure how it works, and we played for 10 hours together.

While picking up the mechanics of the game is fairly simple no matter what class you pick, figuring out the way to get a good ending requires paying attention to an NPC in the first area you spawn who is, lets face it, enigmatic at best. A Google search reveals the bold text translates to directions you are supposed to travel on the map, but this is never explained in gameplay, or if it is, it hasn’t been in the dozen or so hours I’ve played.

Too Much Luck Involved?

Finally, while having a variety of goals to go after in the game means the replay ability factor is huge, it can be frustrating when you run into an event that requires some previous choice in order to progress with that objective. There are many achievements I’d like to go after that require lucking into events in a certain order that just hasn’t happened for me yet. I might have prevented the spawn of events that require previous knowledge if the player didn’t have access to the required story points earlier.

Buy it as soon as you have someone to play with, otherwise, consider waiting for a sale. I nabbed it in a co-op bundle for less than $5, and at that price I actually feel bad and kind of want to give the developers ten more dollars. I certainly have already gotten more than my money’s worth. If after reading this review you are ready to give it a shot in single player, go for it. I’m at 12 hours of gameplay and I already have more than half of the achievements, have played every class, and have seen all but one ending. I expect some of the last achievements, such as the filling the recipe book, will take exponentially longer to get.

What to do Before the End of Legion