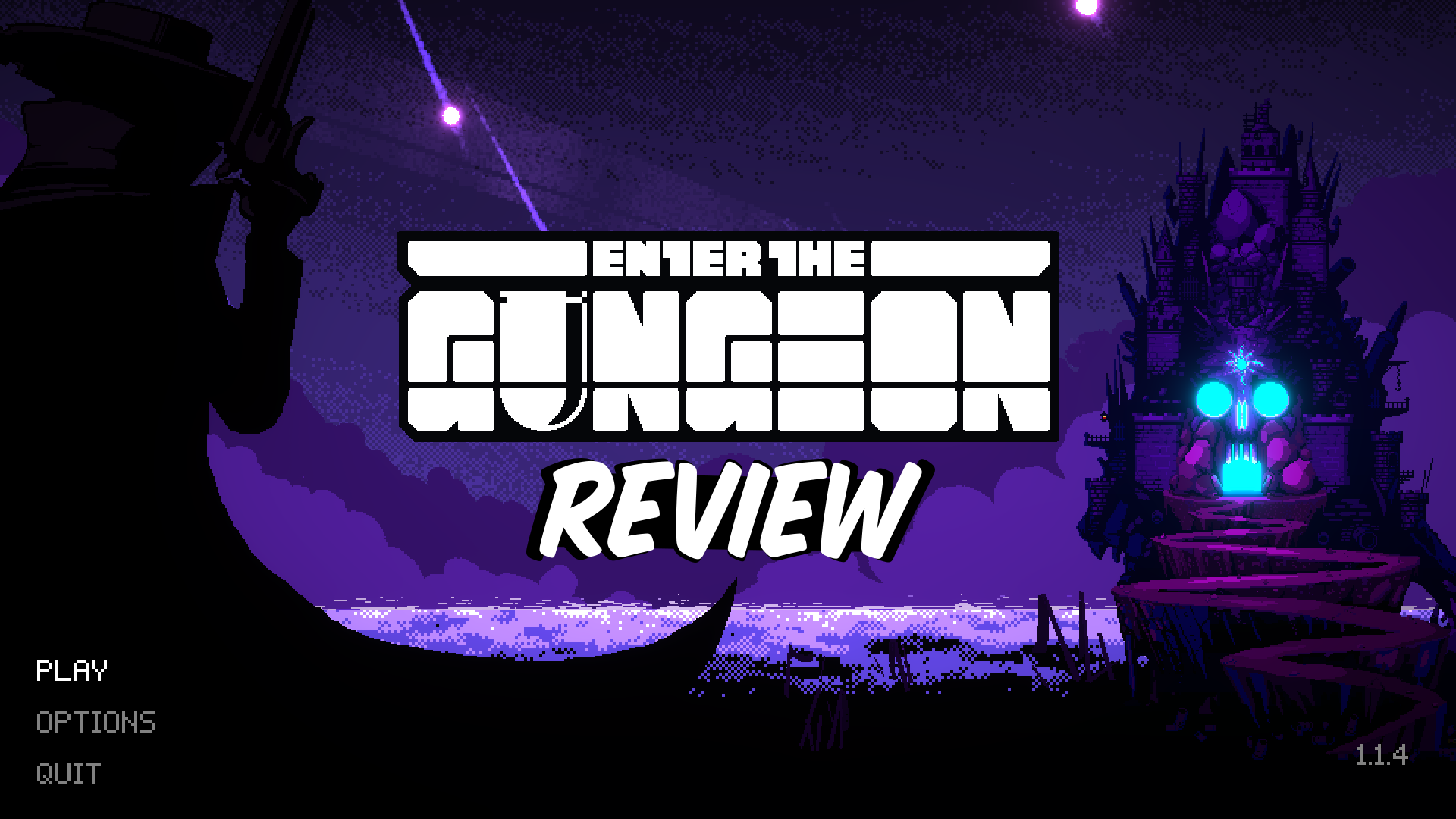 In this Enter the Gungeon review I’ll be going over the good, the bad, and my verdict. The game takes place on a distant planet that houses an ancient artifact: a gun that can kill the past. To make what was done undone they must Enter the Gungeon(and that’s about where the story seems to end). Enter the Gungeon is a roguelike bullet hell dungeon runner that is very similar to Binding of Issac, but with guns! Get ready for a gunslinging, table-flipping adventure.

Four hours into the game I finally beat the first level, and immediately died to an Iron Maiden on level two. Bullet hell is definitely the right descriptor for this game. There is a on use item that stop all bullets for a moment called a “Blank”, but you run out of them quickly. This means you end up dodging bullets using the roll move, bound to right click.

Each class has different passives and weapons. They’re all fun to play, and each has their own strength. You will absolutely develop a favorite, but they all can beat the game, provided they are given the right synergies.

In true roguelike fashion, maps are randomly and procedurely generated. Guns and items found are different every playthrough. As you progress through the dungeon, there are synergies that form between your power-ups. Even when you die there is a quick restart option that allows you to get right back in the action with now downtime. I am absolutely terrible at this game, but I find myself restarting over and over again in hopes that I get lucky with an overpowered weapon or hilarious item.

I am a sucker for pixel art, this is known. And compared to the art direction of Binding of Isaac, I find this much more enjoyable. There are a huge variety of settings and room designs, but despite this enemies don’t blend into the backgrounds. Except the book enemies. Those guys blend into the floor deviously well.

I have not encountered a single bug in the hours that I’ve been playing, which is a stark contrast to one of the other games I’ve played recently, Moon Hunters.

While the game does have the stereotypical exploding red barrel, breaking pots did absolutely nothing. No hearts, no coins, nothing. It felt wrong, especially since the animations for running over the various objects in the room was one of the first things that caught my eye. When I handed the game to my co-op partner to play, they immediately began breaking everything in the room, under the assumption there would be some benefit. I had to Google to make sure, but the tutorial was not lying about the objects having nothing in them.

Co-op Behind A Gate

While I understand the reasoning behind making beating the game a requirement before one can play co-op, I have to say, I was disappointed. One of my favorite things to do when I game is tackle challenges with my friends, but I’m looking at a long journey before I can do that.

While I didn’t have the biggest issue with the keybindings, my co-op partner struggled for a long time to remember that right-click was the roll rather than space. I’m not sure which game she played that had it bound to space, but it definitely felt more natural to her to hit space and die than to perform a successful right-click roll.

Don’t Play For the Story

If you’re the kind of person that loves a story driven game, and you just have to know about how this unlikely band of “heroes” got together, you probably will remain disappointed. There are many intriguing statues and NPCs throughout the game, but it the lore of this game isn’t exactly it’s strong point.

It is such a simple concept- shooting bullets at bullets shooting you with guns. And yet, it is a definite buy. It’s normal price is $15, which is well worth the hours you can dump into this game just trying to get good enough to beat it once. Co-op will provide you with even more hours of salty entertainment.

What to do Before the End of Legion